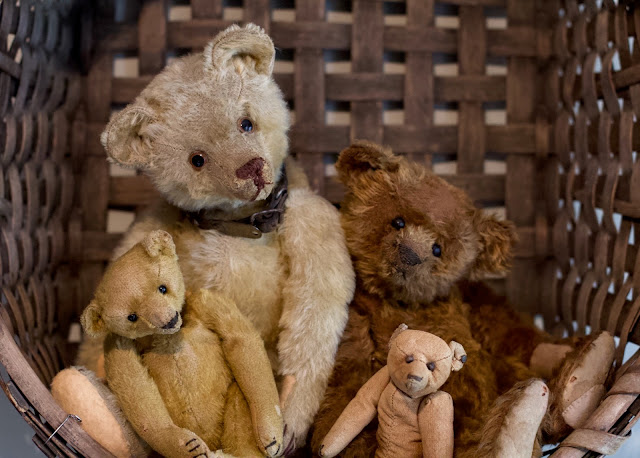 The history of the Teddy Bear is a shared one. Credit is most often given to both the
German company, Steiff, as well as American "penny candy" shop owners,
Morris and Rose Michtom.
Richard Steiff, nephew of Margarete Steiff, founder in 1880 of Margarete Steiff GmbH,
designed and added a jointed bear to the selection of existing toys the company produced.
These first bears were displayed by Richard and the company at the Leipzig
toy faire in 1902. These bears and many other wonderful toys were purchased by shops across Europe and the US.
Around this same time, a political cartoon of President Roosevelt, refusing to shoot a young
tied up bear, sparked and idea in the minds of Rose adn Morris Michtom. Rose stitched up a velvet plush bear, set it in their shop window, and called it, "Teddys Bear".
This "teddy bear" became quite popular, enough so that the Michtom's asked permission
of the President to call the bear "Teddy" and changed their focus to creating plush bears
founding the "Ideal Novelty and Toy Company". 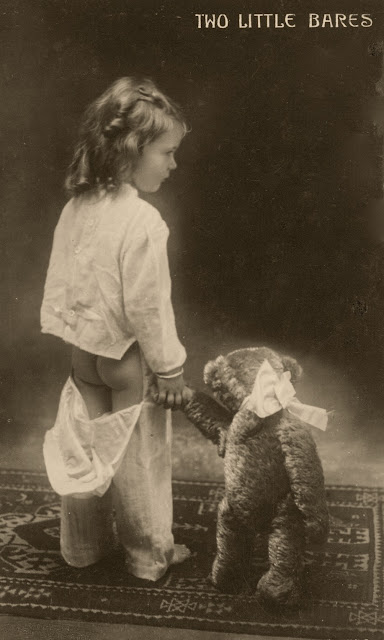 No matter where you feel credit lies, there is no doubt that the teddy bear
quickly became a symbol of comfort and remains so today. 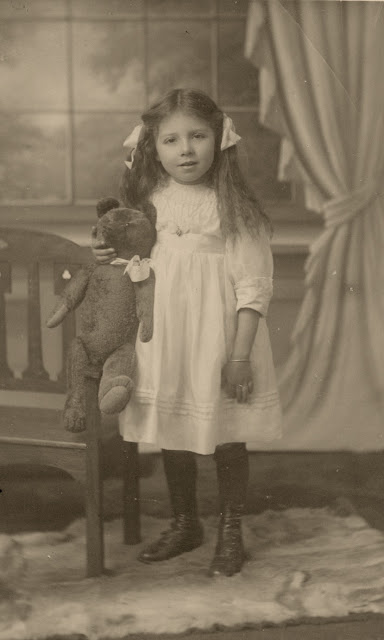 Teddy bears were given to children as gifts or to hold when they were
scared or sick.
Just as we love our fur babies and petting them helps to lower blood
pressure and alleviate stress, a teddy bear seems to act in a similar way.
The softness of their fur, innocent eyes and outstretched arms, imbues a
sense of peace and comfort that can soothe in times of stress. 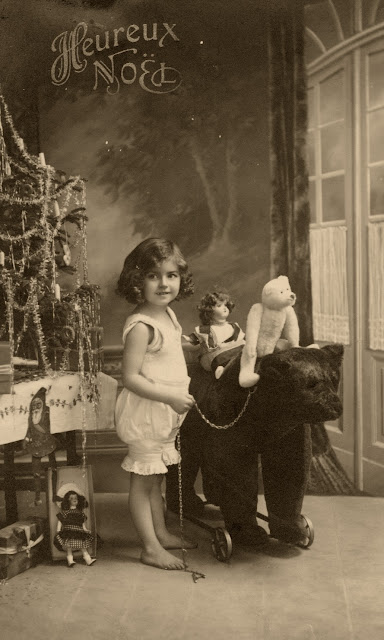 The first teddy bears may have been meant merely as children's toys.
However, today they are loved by young and old alike. Because of this,
teddy bears are often given as gifts of love, sympathy and healing.
Even in wartime, teddy bears played their part. During WW1, many soldiers carried with them,
tiny "pocket bears". For these brave men and women these simple little bears reminded them
of home and loved ones. They provided a sense of comfort and became
good luck symbols, often carried into battle. 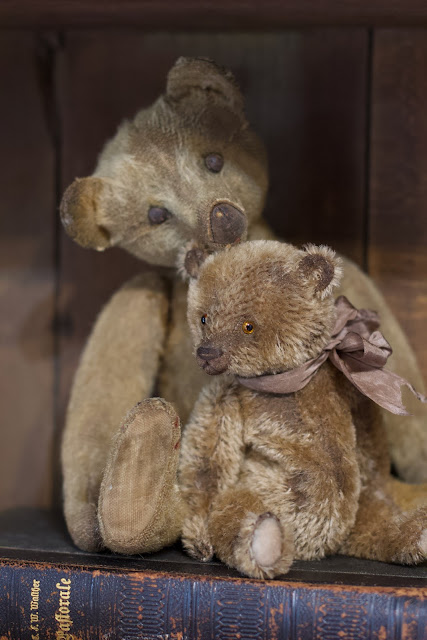 Today we are facing an unprecedented and unsettling time in our history.
We are all feeling like frightened children, yet are called upon
to be brave soldiers.
You may not be able to hug your neighbor, your parents, children or
grandchildren, but for the time being, until this passes,
you can hug a Teddy Bear.

Such a nice history. Thank you for this!

So sorry about your Mom. You posted a lovely tribute


It sure is a stressful time and I think I will take your advice and hug one or maybe all of my teddy bears.

Awwww....such a sweet, precious, post Lori. I knew some of the history behind teddies, but not all....like the part of soldiers carrying them with them. Thanks for the history, the words of wisdom, and the beautiful eye candy. Stay safe and well ~ Robin

Thank you for this post. It brings me peace and calming during this time of crazy. I so appreciate that ❤

Your post made me happy today. I have a most wonderful teddy that sits on my bed. We bought her in Oct., 1997, in Warwick, England in a tiny shop that sold dolls and handmade teddies. I love her so much--she has an antique piece of lace around her neck that is closed with an antique pin and was made by Bainbridge Bears. I wish I could find out more about them now. She makes me smile every day. I can't believe I've never named her... I'd post her picture if I could :)

* Each of my original designs is created as a soft sculpture collectible with an adult collector, stitcher or home decorator in mind. Items such as glass eyes, antique accessories & steel shot used for weight in stuffing are not suitable for small children. ~ Lori Ann